Devil's Son in law Wiki
Register
Don't have an account?
Sign In
Advertisement
in: Characters, Male, Alive,
and 14 more
English

Chen Rui is the main character of Devil's Son-In-Law.

An otaku from earth, he is reborn in the body of Arthur Roland and transported to the Demon Realm, the legendary, evil, brutal world of Mozu, where humans are treated as food. He has to survive against horrible demons, violent dragons, and all sorts of powerful enemies by relying on his wits and a mysterious Super System mind chip.

On the way he meets many beauties and devils such as the black-hearted lolita princess, the queen of ice, the violent scythe, the poisonous dragon, the charming succubus, and more.

Living in the Demon Realm is hard, especially as a human, and becoming the devil's son-in-law is harder.

Chen Rui uses his own resourcefulness, skills, and strategies, starting as an ordinary human to becoming the legend as the devil's greatest son-in-law.

Chen Rui is reborn in the body of Arthur Roland, a prince from the Dragon Bright Empire in the Human Realm. Arthur was engaged to Landbis of the Blue Glory Empire.[7] But somehow, Arthur was transported to the Demon Realm, where he merged with Chen Rui.

Chen sometimes uses the alias Arthur like when he travels to Dark Shadow Empire to win the Mechanic contest.

Chen Rui uses the alias Agulie (阿古烈) when fighting criminals at night and participating in the Arena so that he does not reveal his true identity. Agulie is the leader of the Cloak Gang. He wears a mask.

In terms of mechanics, he seemed to have reached the senior master level. He had very strong hands-on ability. After some instruments were improved by him, the efficiency had been greatly improved. Many abandoned and aging props had also been repaired. He also had a unique understanding of Dragon Inscription and magic circle. Zola was even inferior to him in some aspects.

Apart from his mechanics, this guy's culinary skills had also reached the master level. His enviable innovation was also manifested in food. Zola had never tasted such new and delicious food in thousands of years.[22] 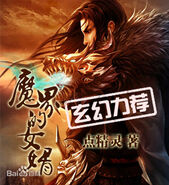 Aguile appears (or is mentioned) in 35 chapter(s):

Charles appears (or is mentioned) in 2 chapter(s):

Simon appears (or is mentioned) in 3 chapter(s):